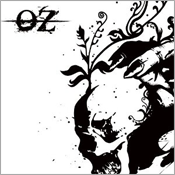 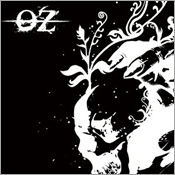 ① Reverse (3:33) [PV]
As expected from -OZ-, they bring a strong intro. You can just tell from the beginning, with the instrumental build-up and Natsuki's deep growls that this is going to be a pump-up song. I like the melody and rhythm of the intro, but something just sounds a little off about it. I'm not exactly sure how to explain it, really. Like even thoug hthe music is deep and booming with bass, there's some strange guitar effect added to it that makes it sound staticy and hurts my ears. I actually extremely dislike this effect, and unfortunately, it persists throughout pretty much the entire song. If it wasn't there, this song would have been so much better. I also usually like their screams and growls, but not when that is the entire chorus. Quite disappointed to hear this as the a-side of their new release after almost a year since their last one.
RATING: 5/10

② Unseal (4:22)
I like the intro of this song better than the entirety of the previous song already, with its fast guitars and drums, and variety of notes. I didn't think this was one of their catchier choruses at first listen, but it definitely grew on me. In addition, that one high note is definitely love. I absolutely adore it when Natsuki sings in his higher register; it's definitely what makes -OZ-'s songs, especially their choruses, so powerful. Also loving Zukki's brief awesome drumming right before the equally awesome guitar solo.
RATING: 6.5/10

③ Ecdysis (5:24)
The beginning is pretty wow, with the brief pauses between every few so notes, which sounds amazing. The verses of this song are so beautiful, absolutely loving it. Although the guitars and bass are soft and slow, they give it a melancholy feel, along with the soft vocals. Chorus-wise, however, it just isn't up to par for me compared to their other songs (not on this release, but in general). For this song, perhaps it's because it's just extremely slow and notes are held for too long, or perhaps it's not because of the chorus itself, but the tone of Natsuki's voice, which sounds lower. I was pleasantly surprised at the instrumental break; it's a little faster than the rest of the song; the guitars play a great interesting sequence, and the drumming is also quite unique. Easily my favorite song of this single.
RATING: 7/10

This was a pretty good single, but I've definitely heard better from them. Given all the -OZ- songs that I've heard and love, this one came as just a tad of a disappointment, especially their a-side choice. Compared to their last single, I definitely prefer viridian better. My expectations were quite high, and as mentioned earlier, it's a bit upsetting to hear Reverse as their first song in almost a year. The melodies, I've noticed, are also at a lower pitch than they usually do (or maybe Natsuki's voice just got deeper), which really affects how the songs sound and doesn't have the same effect on their usually powerful choruses.